It’s empowering to know who we are, from whom & where we are formed… by telling the stories ourselves, we see an example of how to live, how to inspire and how to honor our ancestors, Aguanile, Mai, Mai…

MimiTVA posting from the DMV

Cuban filmmaker Gloria Rolando has been an inspiration to me for quite some time.  Her films are treasures of knowledge presented in the way of a modern day Griot, proud and brilliant; they make me eager to connect to my ancestors and fill me with pride in the way my father’s booming voice did, oh so long ago. 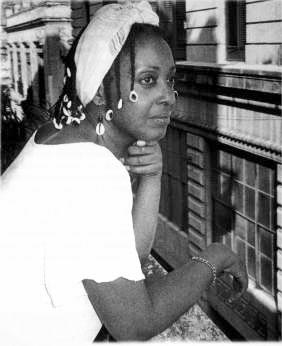 Gloria Rolando’s first film; “Un Eterno Presente: Oggún” is an audiovisual homage to the Yoruba diety Oggún.  Oggún is the blacksmith deity presenting the modern world of industrialization, and works with metals and technology through the songs of the immense Yoruba vocalist, Lazarro Ros.

In the film Rolando explains how the men and women of Lázaro’s generation, are the last bridge tying us to the Africa that gave birth to its roots in the Americas. “We must recognize that it contains legends and universal values that explain the world. My personal experience with Oggún demonstrates to me that this is possible.”

“Eyes of the Rainbow,” is a documentary made in 1997 about Assata Shakur, the Black Panther and Black Liberation Army leader who took refuge in Cuba after years of struggles in the US.  The film integrates AfroCuban culture, including the Orisha Oya, to show Assata’s place in Cuba, where she has lived for the past three decades. In English.

Gloria’s latest film effort is about the Indepedientes de Color or The Independents of Color a Cuban Political party that was formed after the largely Mambi Army ousted the Spaniards from Cuba in the late 1800’s.   Recent research in Cuba has established that this army was overwhelmingly made up of Cubans of African descent (80% and perhaps as high as 90%): consequently it was thus one of the largest revolts of enslaved Africans in the hemisphere.  When the Mambis had ejected the Spaniards from Cuba, the plantocracy  / plantation owners became allies of the Americans.  These events led to the little known Massacre of 1912.

Evaristo Estenoz founded the Independents of Color in 1908 in order to secure a rightful share for Afro-Cubans in all aspects of  Cuban society, specifically the government which had successfully marginalized them. He was murdered by Cuban troops in 1912 along with more than 6,000 other AfroCubans and fellow party members, after an intense media campaign carried out by the planter class to demonize the party.  As famed sonero Arsenio Rodriguez says: “Hay que adorarlos como a Martí!”  Roots of my heart is the first treatment on film of a  history that has been largely ignored by both sides of the Florida Straights.