La Vida En Black History continues today as Venezuela struggles with its sovereignty. Their fight today is not unlike their fight 100 + years ago… Afro-Venezuelans have continued to live in deep poverty and subjugation.  This Venezuelan African, prays for peaceful, and productive change.

Black-Venezuelans played a decisive role in the struggle for the nation’s independence from Spain. At first the enslaved people went to war for their Spanish colonizers, believing that their land owner and masters were their enemigo.  In particular, the notorious royalist battalion of General José Tomás Boves attracted many enslaved soldiers because his viciousness was appealing in extracting revenge from the horrors of enslavement. However, Bolívar, ever the strategist,  began to realize the importance of Afro-Venezuelan soldiers in the fight for independence.

Bolivar formally declared the abolition of slavery in 1812 and again in 1816, after promising Haitian President Alexandre Pétion that he would secure freedom for the enslaved people in return for Haitian military aid. A major landowner himself, Bolívar freed 1,000 enslaved people, and in 1819 recruited 5,000 of them into his army. José Antonio Paéz, a key figure in Venezuelan independence, led an army of Blacks from the llanos (plains). One of his most famous lieutenants, Pedro Camejo, has been immortalized in Venezuelan history as “El Negro Primero,” because he was always the first to ride into battle and attack his opponents with a knife.  In the final battle of Carabobo, Camejo was mortally wounded but returned to General Paéz to utter one of the most famous statements in Venezuelan history: “General, vengo decirle, adiós, porque estoy muerto” (General, I have come to say goodbye, because I am dead). A statue of El Negro Primero stands in the Plaza Carabobo in Caracas—the only statue commemorating a Black Man in all of Venezuela.

The historical Negro Felipe (literally “Black Philip”) had escaped enslavement from Cuba and played a prominent role in the struggle for Cuban independence. He went on to serve as Simon Bolivar’s aide before being murdered by Spanish colonists in Venezuela.

Now among the most beloved of the spirits of Maria Lionza, (A fused religion of African Ebo and Carib Indigenous belief system) he is venerated independently and is now one of the Très Potencias, the triad consisting of Felipe, Maria Lionza, and Guaicaipuro. Felipe is considered a glorified ancestor, crowned the head of the African Court and an important member of the Court of Liberators. Felipe serves as the spiritual link between Maria Lionza, and the Yoruba or traditional African religions that are today, increasingly popular in Venezuela.

With the declaration of independence in 1810, all human trafficking in the newly formed Venezuela was outlawed. The decline in slavery continued throughout the War of Independence when, at its conclusion in 1821, the “Ley de vientre” was passed, stating that all children born, whether of slave or free parents, were automatically free. By the 24th of March 1854, the date of slavery’s official abolition in Venezuela, less than 24,000 enslaved people remained.

Throughout the twentieth century, Blacks in Venezuela have faced subtle forms of racial discrimination despite a philosophy of racial democracy and an ideology of mestizaje that contends all groups have blended together to form a new, indistinguishable type, called the mestizo. Yet right below the surface of this social ideology is this intentional discriminatory racist policy of blanqueamiento, or “whitening,” that has encouraged both the physical and cultural assimilation of Afro-Venezuelans into a Euro-dominated mainstream. An important semantic counterpart to the process of blanqueamiento is that found in the term negrear, which denotes concepts of “marginalization” or “trivialization.” 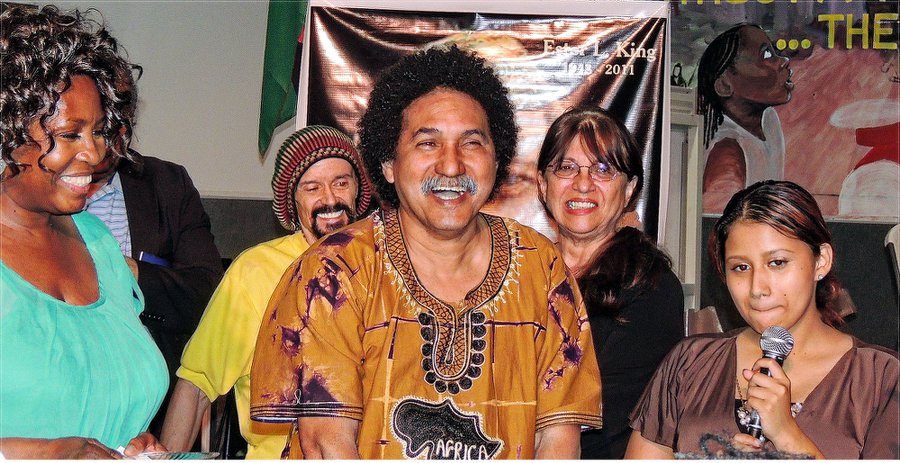 The emergence of Black intellectuals such as Juan Pablo Sojo and Manuel Rodrigues Cárdenas in the 1940s, and more recently of younger writers such as Jesús García (pictured above) has helped counter the negative forces of blanqueamiento. A strong body of research in Afro-Venezuelan history and folklore has also been established by Venezuelan scholars, particularly Miguel Acosta Saignes (1967).

Public festivals such as the Fiesta de San Juan have emerged as focal points in the reappropriation of Afro-Venezuelan culture, articulating current transformations in a living tradition of cimarronaje (resistance to the dominant culture, consciousness of being marginal). Throughout Venezuela and the rest of South America the enlightenment of the descendants of Africans is growing and Black South Americans are embracing the beauty of their own identity.